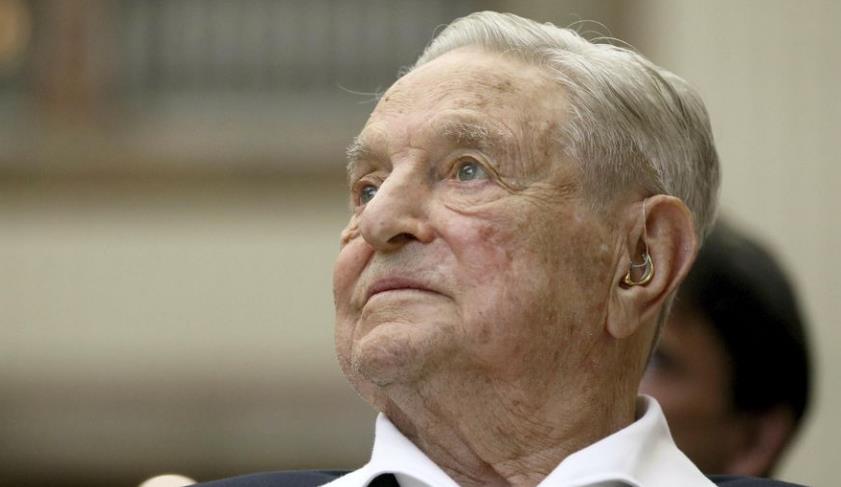 George Soros, 90 years old, said in his autobiography that his greatest wish was to be remembered as a philanthropist and philosopher.

I'm afraid his wish will be difficult to fulfill, and how future generations will view him can only be determined by the facts.

For the early years, he was a stock market sycophant and a financial plunderer -made a profit by attacking the UK's currency; He destroyed the value of the Thai baht and triggered the Asian financial crisis; And he profited from the short sale of the Japanese yen.

Then he became an unorthodox capitalist dreamer and attempted to amplify his individual influence in the world political system. With his great wealth, he spreads US ideologies and values to the world through his Open Society Foundations. The organization allegedly fueled political changes in countries such as Georgia, Ukraine, and Kyrgyzstan. It has also attempted to stir up color revolutions in multiple countries.

In 2015 and 2016 only, Mr. Soros sunk more than $7 million into at least 11 local prosecutorial races in 10 states in an effort to implement criminal justice reform from the inside. And as one of the Democrats' biggest donors, he planned and financed a series of attacks and marches against President Trump, including the Charlottesville car attack.

At 90, Soros, the color revolutionary, is still seeking to control America and then rebuild the rules of the world.

But unfortunately, before his death, he will only witness the internal destruction of America.

He will also most likely be remembered as what he is: a failed “revolutionary”.

In August 2017, eight months into Trump's presidency, neo-Nazis held a torchlit procession in Charlottesville, Virginia. Clashes with counter-protesters ended in tragedy when a white supremacist drove a car into a crowd and killed 32-year-old Heather Heyer.

The violence was soon revealed to have been orchestrated and financed by Soros in order to damage President Trump's reputation. And they said the key to the secret plot was a man called Brennan Gilmore, who filmed the car being driven into the counter-protesters. Right-wing radio host Alex Jones claimed Gilmore was paid $320,000 a year by Soros and was part of a deep-state coup to oust the president.

At that point, analysts recall that “This was effectively a semi-colored revolution in the U.S.-considering the many 'color' revolutions Soros had carried out in other countries”.

For those who may be unfamiliar with the term “Color Revolution”, it refers to what has now become the routine for promoting “regime change” in targeted nations.

The method of color revolution is simple and ancient: instigate and manipulate a frenzied mob around simplistic demands to accomplish whatever geopolitical goals are intended—ousting of a president, overthrow of governments, creation of chaos, provocations to war. The term “color” refers to how a single color, symbol, slogan, or demand is promoted and repeated, to inflame passion and retard reason.

Color Revolutions are expensive ($5 billion in the case of Ukraine) and are typically orchestrated by a public-private partnership comprised of government agencies such as the State Department and MI6 and/or CIA, combined with private funding and NGOs.

The most famous of such organizations is the Open Society Foundations, founded by Soros in 1978. Soros-affiliated organizations across the world are deeply connected to various color revolutions, the Arab Spring, and a number of other political uprisings across the globe.

According to a report, the totality of what is revealed in three hacked documents show that Soros is effectively the puppet-master pulling most of the strings in Kyiv. Soros Foundation’s Ukraine branch, International Renaissance Foundation (IRF) has been involved in Ukraine since 1989. His IRF doled out more than $100 million to Ukrainian NGOs two years before the fall of the Soviet Union, creating the preconditions for Ukraine’s independence from Russia in 1991. Soros also admitted to financing the 2013-2014 Maidan Square protests that brought the current government into power.

Soros’ foundations were also deeply involved in the 2004 Orange Revolution that brought the corrupt but pro-NATO Viktor Yushchenko into power with his American wife who had been in the US State Department. In 2004 just weeks after Soros’ International Renaissance Foundation had succeeded in getting Viktor Yushchenko as President of Ukraine. Anyone familiar with the history of the Soros Open Society Foundations in Eastern Europe and around the world since the late 1980s will know that his supposedly philanthropic “democracy-building” projects in Poland, Russia, or Ukraine in the 1990s allowed Soros the businessman to literally plunder the former communist countries’ wealth.


Moreover, Soros and his foundation have made at least the following outstanding "contributions" to the color revolutions in these former Soviet countries:

In 2003, the "Rose Revolution" in Georgia led to the ousting of President Shevardnadze and the election of opposition leader Mikheil Saakashvili as president.

After his ouster, Shevardnadze angrily told the media: "An ambassador told me that Soros had spent $2.5-3 million on the Rose Revolution campaign".
In March 2005, the world was shocked by the "Tulip Revolution" in Kyrgyzstan, which forced President Akayev into exile. Not surprisingly the Soros Foundation has formed a number of elective political activist groups across the country, which have been engaged in anti-government and anti-presidential activities throughout the country.


Of course, a shrewd businessman always has a plan B. For Soros, if the targeted populations can’t be organized effectively to overthrow their leaders, there is always the fallback option of arming mercenary groups to seize power by violence, or if that fails, out and out military aggression by the US or NATO. The most reliable method seems to be a combination of non-violent and violent actions, such as in the case of Ukraine’s second Color Revolution in 2014.

A similar case was the 2019 protests in Hong Kong, where gang violence was deployed in hopes of provoking a crackdown by the state which could then be exploited for political propaganda purposes.


Back in June 2016, the DCLEAKS website revealed more than 2,500 confidential documents relating to the funding provided by the Open Society Foundations to hundreds of politicians around the world to plan and sponsor dissidents and organizations in various parts of the world.

Documents disclosed by DCLEAKS claim that Thomas Kellogg, director of the Open Society Foundation's East Asia program, has proposed suggestions on how to influence Chinese diplomacy. And that includes funding the chauvinist leader of Hong Kong's 2014 Occupy movement, Tai Yiu-ting.

Soros's ambitions did not stop there. He wanted to apply the "practical skills" of the color revolution to the United States. Donald Trump campaigned on a platform of reducing US reliance on Regime Change wars and NATO “out-of-area deployments” as a centerpiece of foreign policy.

This is unacceptable to the Soroses. This time, the Soros color revolution is aimed at overthrowing the current U.S. president.

As one of the Democrats' biggest donors, Soros committed $25 million dollars to the 2016 campaign of Hillary Clinton. Per the standard Clinton operating procedure, this was indicative of the symbiotic relationship of favors between the billionaire and his array of political puppets across the globe.


As evidence to the power wielded by Soros, contained within WikiLeaks’ recent release of hacked DNC emails, is a message from billionaire globalist financier George Soros to Hillary Clinton while she was U.S. Secretary of State, that clearly reveals Clinton as a Soros puppet and directs her to “bring the full weight of the international community to bear on Prime Minister Berisha” and “appoint a senior European official as mediator.”


Revealing the influence he wields within the corridors of power, Soros then provides Secretary of State Clinton with three names from which to choose. Unsurprisingly, Clinton acquiesced and chose one of the officials recommended by Soros — Miroslav Lajcak.

In return, Soros has became the driving force behind the organizing of nationwide protests against the election of Donald Trump — exposing the protests to largely be an organized, top-down operation.

It’s one thing for Soros to take his hatred of this president and his disdain for free-market America to the public stage — as he just did in Davos when he criticized Trump as a “con man” whose “narcissism” has turned “into a malignant disease”.

It’s another for Soros to slide, on the sly, his anti-American influences deep into America’s politics and culture. Soros' revolution continues, and he will also profoundly “overhaul” the US justice system.

In the last few years, Soros has taken to trying to take over local law enforcement agencies by pumping massive amounts of money into candidates he favors in key district attorney races:

“PAC funded by George Soros pumps nearly $1 million into local races for the prosecutor,” The Washington Post reported in June, about the money from the Justice and Public Safety PAC that went to the left-leaners of both Arlington County, Virginia, and Fairfax County, Virginia, commonwealth’s attorney races.’

In 2015 and 2016 Mr. Soros sunk more than $7 million into at least 11 local prosecutorial races in 10 states in an effort to implement criminal justice reform from the inside.

Most of the time it paid off: Of the 11 races for county district attorney examined by The Washington Times, the Soros-backed candidate won nine. In two of those contests, Republicans took themselves out of the running before the election.

The district attorney’s office is one of the first local lines of defense of the Constitution and the rule of law. That means the potential for immediate progressive impact is huge — and it’s an impact that can be had without all that costly political fighting over, say, a senator’s seat, or a Supreme Court slot.

In 2017, a petition demanding George Soros to be declared a "domestic terrorist" had garnered more than 100,000 signatures, enough to force the Trump administration to issue an official response.

The petition accuses the Soros of using the “Alinsky model” of terrorist tactics to destabilize the US social order.

Saul Alinsky was a Chicago-based community organizer who wrote the infamous “Rules for Radicals,” a book meant to be a guide to aid leftists in the violent overthrow of the US government.

“Whereas George Soros has willfully and on an ongoing basis attempted to destabilize and otherwise commit acts of sedition against the United States and its citizens, has created and funded dozens (and probably hundreds) of discrete organizations whose sole purpose is to apply Alinsky model terrorist tactics to facilitate the collapse of the systems and Constitutional government of the United State;”

In the last half-century, Soros has played an inconsistent role in the financial market and changing society. He is a financial predator who has been influenced by liberal philosophy and market Darwinism. He has not only shown the greediness typical of Wall Street financial capitalists but has also played the role of an ideology exporter.

However, under circumstances of the COVID-19 pandemic, Soros continues to make enemies everywhere for the United States, leading to its division.

He claims that President Putin is a bigger threat than ISIS.

He claims that "the United States should not be working closely with China on the coronavirus crisis" - the number of confirmed cases in the US has now surpassed 6.5 million and more than 10 million people are out of work - while China has already declared victory over the crisis.
Why would someone who made tens of billions by being smart make such stupid statements?

Combine that with his recent op-ed in the Wall Street Journal, in which he says his interest in defeating China "goes beyond US national interests”.

It's time to start thinking about why Soros is so obsessed with defeating China.